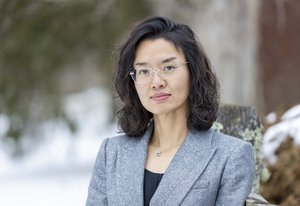 Click the links that follow for more news about Danfeng Yao, other IEEE Fellows in the Brown CS community, and other recent accomplishments by our alums.

The IEEE Board of Directors confers the IEEE Grade of Fellow upon a person with an outstanding record of accomplishments in any of the IEEE fields of interest. The total number selected in any one year cannot exceed one-tenth of one percent of the total voting membership. IEEE Fellow is the highest grade of membership and is widely recognized by the technical community as a prestigious honor and an important career achievement.

Danfeng earned her PhD from Brown CS in 2007, advised by James A. & Julie N. Brown Professor of Computer Science Roberto Tamassia. She also holds M.S. degrees from Princeton University (Chemistry) and Indiana University, Bloomington (Computer Science) and a B.S. degree from Peking University in China (Chemistry). Her research interests include building cyber defenses, as well as machine learning for digital health, with a shared focus on accuracy and deployment. She creates new models, algorithms, techniques, and deployment-quality tools for securing large-scale software and systems. Her tool, CryptoGuard, helps large software companies and Apache projects harden their cryptographic code. She systematized program anomaly detection in the book Anomaly Detection as a Service. Her patents on anomaly detection have been cited by patents from major cybersecurity firms and technology companies, including FireEye, Symantec, Qualcomm, Cisco, IBM, SAP, Boeing, and Palo Alto Networks.

“I am delighted by the news of this prestigious recognition for Danfeng,” says Roberto. “Her work is technically deep and addresses fundamental cybersecurity challenges. Achieving elevation to IEEE Fellow status 15 years after her PhD is impressive and attests to the impact and visibility gained by her work.”