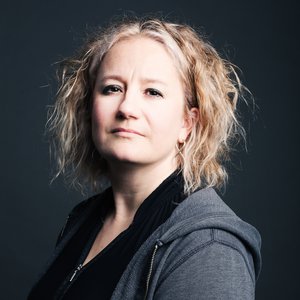 Click the links that follow for more news about danah boyd and recent accomplishments by Brown CS alums.

Founded almost thirty years ago, the Electronic Frontier Foundation (EFF) is one of the leading nonprofit organizations defending civil liberties in the digital world. In 1992, they established their Pioneer Award to recognize leaders on the electronic frontier who are extending freedom and innovation in the realm of information technology. The list of previous winners is formidable (it includes Anita Borg, Tim Berners-Lee, Douglas Engelbart, and Limor Fried), and on September 12, 2019, Brown CS alum and Advisory Board member danah boyd joined them alongside author William Gibson and surveillance-fighting organization Oakland Privacy.

In her acceptance speech, danah addressed what she called a "great reckoning" that's begun to occur in response to a patriarchial and exclusionist industry whose values, she says, have been lost or violated. "People can change," she said. "Institutions can change. But doing so requires all who harmed — and all who benefited from harm — to come forward, admit their mistakes, and actively take steps to change the power dynamics. It requires everyone to hold each other accountable, but also to aim for reconciliation not simply retribution."

She also offered advice on how to achieve this: "Let’s stop designing the technologies envisioned in dystopian novels. We need to heed the warnings of artists, not race head-on into their nightmares. Let’s focus on hearing the voices and experiences of those who have been harmed because of the technologies that made this industry so powerful. And let’s collaborate with and design alongside those communities to fix these wrongs, to build just and empowering technologies rather than those that reify the status quo."

Currently working as a Principal Researcher at Microsoft Research, danah is the founder and president of the Data and Society Research Institute and serves as a Visiting Professor at New York University. She also serves on the boards of Crisis Text Line and Social Science Research Council and is a Trustee of the National Museum of the American Indian. Widely recognized as an authority in the field of social media research, her recent work focuses on how data-driven technologies can amplify inequities, mistrust, and hate. This recognition by the EFF is the latest in a long list of accomplishments, including (most recently) being named to the Forbes Top 50 Women in Tech, winning the Award for Public Sociology from the American Sociological Association, and being named the “smartest academic in the technology field” by Fortune.