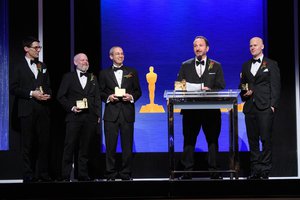 In the days since we went to press with the story below, Brown CS alums Dave Simons ’90 and Daniel Wilk ’92 have won yet another award for their work on Adobe Character Animator. The National Academy of Television Arts and Sciences has recognized the tool as a Pioneering System for Live Performance-Based Animation Using Facial Recognition. Developed by Dave’s team, Character Animator allows artists to animate characters in real time via live tracking and has changed the landscape of character animation. “We are honored to work on software that allows artists to tell their stories in new ways,” says Dave when asked about his motivations for the project. The tool was used for the first-ever live episode of The Simpsons, live cartoon interviews on The Late Show with Stephen Colbert, and the quick-turnaround production of Our Cartoon President, and will undoubtedly continue to make waves in the animation industry.

“We knew the odds were against us,” laughs Brown CS alum Dave Simons ’90, “but the idealism of four recent college graduates trumped the 90% failure rate we were warned about.” Nearly 30 years later, it seems this idealism may not have been misplaced, as Dave, along with fellow Brown CS alums Daniel Wilk ’92 and Michael Natkin ’89, have just won an Academy Award in scientific and technical achievement for their work on Adobe After Effects. Awarded to those who provide extraordinary contributions to the science of filmmaking and a proven record of contributing significant value to the process of making motion pictures, the honor truly recognized the critical role that After Effects has come to play in the motion graphics industry.

What motivated Dave to begin his work on this pioneering project? Well, it all started in the graphics group of Brown CS Professor Andy van Dam many years ago, at a time when undergraduate contributions to research were far less common. (Michael also mentioned both Andy and his group in his acceptance speech, thanking van Dam for "giving me a chance" and a first introduction to graphics.) “When I first began my work in this field, all the tools were command-line tools,” explains Dave, “and I actually did my senior thesis on distribution ray-tracing.” Friendships at Brown naturally led to the birth of The Company of Science & Art, otherwise known as CoSA for short. Founded by Dave and three other Brown graduates in June of 1990 –Greg Deocampo ’88, David Foster (DaveF) ’90, and David Herbstman (DaveH) ’90– the company planned to become the next world-class content provider for the new electronic age. “After searching all around Providence, DaveF found a great place near downtown,” he remembers. “DaveH negotiated the rent down to $1000 a month, and we were in business.”

With such lofty expectations, it was no surprise that the fledgling company inevitably faced a myriad of setbacks in its early years. The original plan was to have artists and programmers working side by side to produce multimedia content, and CD-ROM production was the first task. Named Connections: The CoSA Journal, this first hypermedia publication was designed to show off the new medium, but garnered little interest. This was followed by PACo (PICS Animation Compiler), which allowed platform-independent low-bandwidth streaming animation playback with synched sound. What initially seemed like a promising idea, however, quickly changed as Apple announced QuickTime a mere few months later. Running low on funds, the team knew that they needed to come up with something fast. And it was from this that Egg (the first codename for After Effects) was born. This is where Dave’s graphics-group training would really start to pay off.

With Egg development in full swing, it was at this point that Dan Wilk ’92 joined the team, helping to write effect plug-ins. The first press demos of the brand-new software were held in a private suite at MacWorld Boston. After receiving positive reviews from the public, the team quickly realized that the project needed a real name – After Effects.

“Showing After Effects 1.0 to the public for the first time was an exhilarating experience,” remembers Dave, “We had a tiny booth and people were packed ten-deep at times trying to get a glimpse.” The software exploded in popularity, and CoSA was bought out a mere six months later by Aldus Corporation, followed by another merger of Aldus into Adobe Systems a year later. This set into motion the chain of events that led to After Effects becoming the dominant motion graphics and visual effects application used in the post-production process of film and television production.

“It’s easily the most common tool now to do motion graphics in the film industry,” explains Dave, “and it really lets you create anything you want in this field.” Brown CS has certainly left its mark on the industry, as over 15 Brown graduates worked at CoSA or were involved in the After Effects project. Used for most of the iconic Pixar movies’ opening and closing credits, After Effects has quickly become an indispensable tool in the artist’s toolkit.

With such an accomplished career, what does Dave believe prepared him best from his years at Brown? Well, it may very well have been his experiences TAing a myriad of classes in Brown CS. “I was a head TA for Andy van Dam in CS 11 and CS 192,” he remembers, “and Andy’s high bar and criticalness made me learn a lot.” Dave has certainly come a long way from the old, refurbished apartment in which the project first began, and his work has undoubtedly made it possible for countless artists to enable their dreams.

For more information on the history of CoSA and the team’s Academy Award acceptance speeches, see the following link.