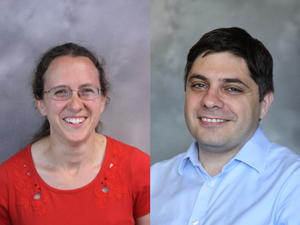 The Defense Advanced Research Projects Agency (DARPA) has awarded four Brown University faculty members with Director’s Fellowships, which are given to the top performers among agency’s Young Faculty Award recipients.

David Borton, Amanda Jamieson, George Konidaris and Stefanie Tellex each won Young Faculty Awards in 2015, which provide up to $500,000 in research support over two years. The Director’s Fellowship provides a third year of funding of up to $500,000 to recipients who demonstrated “exceptional performance” over their first two years.

“The Young Faculty Award itself is highly competitive — these four faculty members were among only 24 awardees in DARPA’s class of 2015 — and the Director’s Fellows represent the best of the best,” said Jill Pipher, vice president for research at Brown. “Their innovative approaches in research may lead to transformative capabilities in immunology, robotics and neurotechnology.”

Borton’s lab at Brown focuses on neurotechnologies that may one day restore movement in people who have been paralyzed by an injury or illness. His DARPA work aims to develop new lower-limb prosthetics that can do something no current artificial leg can do: provide sensory feedback to the nervous system. Having a sense of where our limbs are in space helps with balance, posture and fall-avoidance. Borton is developing the computational models necessary to recreate that sensory information, as well as a system that can write that information into the nervous system through mild electrical stimulation of the spine. During his third year of funding, Borton plans to expand the work to include stimulation in the brain, which could provide increased awareness of an artificial limb’s position in space.

The development of infection after injury or surgery is a serious problem for patients in civilian hospitals, but is especially challenging for warfighters given the nature of their injuries and the settings in which they are treated. While much medical research is focused on healing wounds and clearing infections, Jamieson’s research has a different but no less critical focus. She’s interested in ways to make people more resilient in the face of injury or infection—better able to weather the storm while healing takes place or an infection runs its course. For her DARPA project, Jamieson is looking at how lung infections influence the body’s ability to heal external wounds, in search of ways to make both skin and lung tissue more resilient to insult.

Konidaris’ lab is working to develop intelligent, general-purpose robots. While the physical capabilities of robotic hardware have improved dramatically in recent years, the software side of robotics still lags a bit behind. Part of the problem, Konidaris says, is that robots still see the world essentially as sets of pixels. Getting a robot to translate those pixels into higher-level concepts — and then to associate concepts with appropriate actions — remains a challenge. Konidaris’ DARPA research aims to develop algorithms that help robots learn higher-level representations of the world — making the leap from pixels to abstract concepts — autonomously. Such algorithms could make robots much better at planning their actions in unstructured, real-world domains.

Tellex’s Humans to Robots lab is working to create robots that work collaboratively with people. Part of doing that requires developing better ways to communicate with robots. For her DARPA research, Tellex has been working on algorithms that enable robots to combine information from voice commands with information inferred from human gestures. People communicate in this way all the time. For example, when asking someone to hand them a tool, a person might say, "Could you hand me that wrench?" while pointing to the one they want. Tellex has shown that when robots combine speech and gesture they are able to perform fetching tasks more quickly and more accurately. In the third year of her DARPA award, she’ll continue to hone her algorithm using user studies and a mobile robot fetching objects in unfamiliar settings.